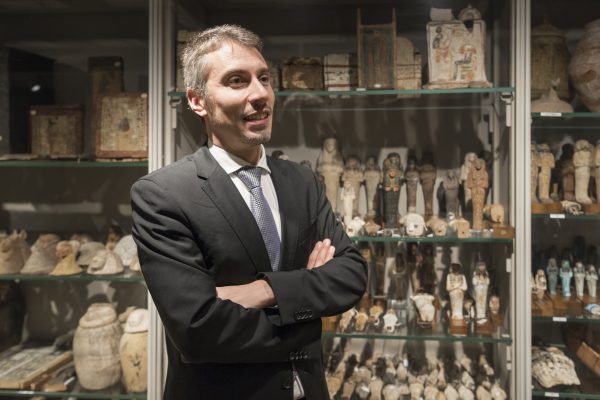 Born in Arzignano (VI) in 1975, Christian Greco has been Director of the Museo Egizio since 2014.

Trained mainly in the Netherlands, he is an Egyptologist with vast experience working in museums.

While at the head of the Museo Egizio, he has set up important international collaborations with museums, universities and research institutes all across the world.

Greco is also a dedicated teacher. He is currently teaching courses in the material culture of ancient Egypt and museology at the Università di Torino, Pavia, Napoli, the Scuola di Specializzazione in Beni Archeologici of the Università Cattolica del Sacro Cuore in Milan and the New York University in Abu Dhabi.

Fieldwork is particularly prominent in Greco’s curriculum. For several years, he was a member of the Epigraphic Survey of the Oriental Institute of the University of Chicago in Luxor. Since 2011 he has been co-director of the Italian-Dutch archeological mission at Saqqara.

Greco’s published record includes many scholarly essays and writings for the non-specialist public in several languages. He has also been a keynote speaker at a number of Egyptology and museology international conferences.

Contact: Secretary of the Director's Office , direzione@museoegizio.it
Museo Egizio
Via Accademia delle Scienze 6, 10123, Torino
Do you want to be updated about Museo Egizio news? Read the privacy policy and subscribe to our newsletter.
© MUSEO EGIZIO, Torino 2018Privacy and cookiesClients policySuppliers policyContact usDesigned by Enhancers